After a four-year hiatus, the Philharmonic Society of Selangor choir, affectionately known as The Phil, will present their much-loved year-end concert titled Songs for the 2022 season at the Damansara Performing Arts Center (DPac) in Petaling Jaya, November 26-27.

“Everyone is thrilled to put on a memorable show, the kind of show The Phil is known for. It’s a testament to the concerted spirit of building community through music and the sense of community that The Phil represents. said The Phil’s Brenda James, who has led the choir since 2019.

Probably the oldest performing arts society in Malaysia, The Phil was incorporated in 1958 and will celebrate its 65th anniversary next year. The choir is the most active arm of the society and to date has staged over 55 productions ranging from classical to contemporary. A remarkable feature of this choir is that it is made up entirely of volunteers who come from all walks of life and aspire to build a community in harmony.

Songs for the 2022 season, led by performing arts stalwart Mervyn Peters, will feature a selection of traditional and contemporary seasonal songs such as Wolfgang’s Christmas cannon, Christmas on Broadway, Hallelujah, Do you hear what I hear and Little boy drummer / Peace on earth.

Peters, 76, first joined The Phil in the mid-1970s, and he conducted most of the company’s choral concerts until 1990. Three decades later he was back at the helm, leading again.

“I was invited in mid-2018 to direct The Phil’s songs for the season concert that year. I accepted the invitation and joined a choir that was not used to my way of working! I think we were both surprised.

“However, most of the choir members stuck with me and we gave a concert that both the choir and the audience enjoyed, and that says a lot to me.”

He added: “We spent 2019 doing workshops for a concert in 2020 which was paid for by Covid-19. Late last year, Brenda and the committee decided they wanted to put on a Christmas concert this year, and here I am.

Man for all seasons

Peters has a long and storied history of involvement in local musical theatre, wearing many hats including producer, director, music director, conductor, choirmaster, stage manager, lighting designer, technical director and actor, and since 1962 when he was a member of a skiffle band at his university in Alor Setar, Kedah.

He moved to Kuala Lumpur in 1963, joined Pos Malaysia in 1964 and kept up his interest in music by singing in the St Francis Xavier Church Choir in PJ, eventually serving as a choirmaster from 1972 to 1976 .

“I have lots of fond memories. At the time, there were many expatriate members in The Phil, and many had good backgrounds in theater and music. They worked with me in my early productions, and I listened, watched and absorbed what I thought was good,” Peters said.

“I joined The Phil in 1976 and in the same year cut my teeth in musical theater with a good mentor, the late Signe Syme, an Australian who ran Tinkerbell Kindergarten with Jalan Tun Razak (in KL). She went on to be manager, musical director, choreographer and producer of The Phil.Before she passed away in 1983 – a week after our 25th musical anniversary – she called me aside and said I was ready to involve in any theater department except choreography!

In 1986, returning from a four-month course in directing with the British Theater Association at Regent’s College London, Peters focused on the technical aspects of theatre, primarily in lighting design and direction. technique in a number of concerts abroad. He was Resident Conductor of the KL Symphony Orchestra (1986-1991), after which he began working on lighting for a number of The Actors Studio performances, and after retiring from Pos Malaysia in 1997 he joined The Actors Studio full time. base as General Manager/Technical Director.

Peters was appointed Orchestra Personnel Manager with the Malaysian Philharmonic Orchestra (MPO) from June 1999 to December 2010. In 2006 he returned to acting as Chorus Leader in Broken Bridges and as Music Director for Tunku: The Musical (2007) and Ismail-The Last Days (2008), which won him a Boh Cameronian Arts Award for Best Musical Direction.

With so much experience under his belt, he would be remiss not to ask the conductor how the work of conducting choirs and musicians has changed over the years, and he was happy to share his insights.

“It’s interesting to see how choirs and musicians have evolved and changed over the decades, but one thing is certain: music is a constant,” he said.

“Take the 1970s for example – when I started leading The Phil backing vocals in the late 1970s, it was a different era and most singers could read music because it was a requirement to the time. Singing music was also much more difficult, as early on The Phil staged a number of oratorios and productions by Gilbert and Sullivan. Christmas carols were not necessarily the most popular; most were of English descent. 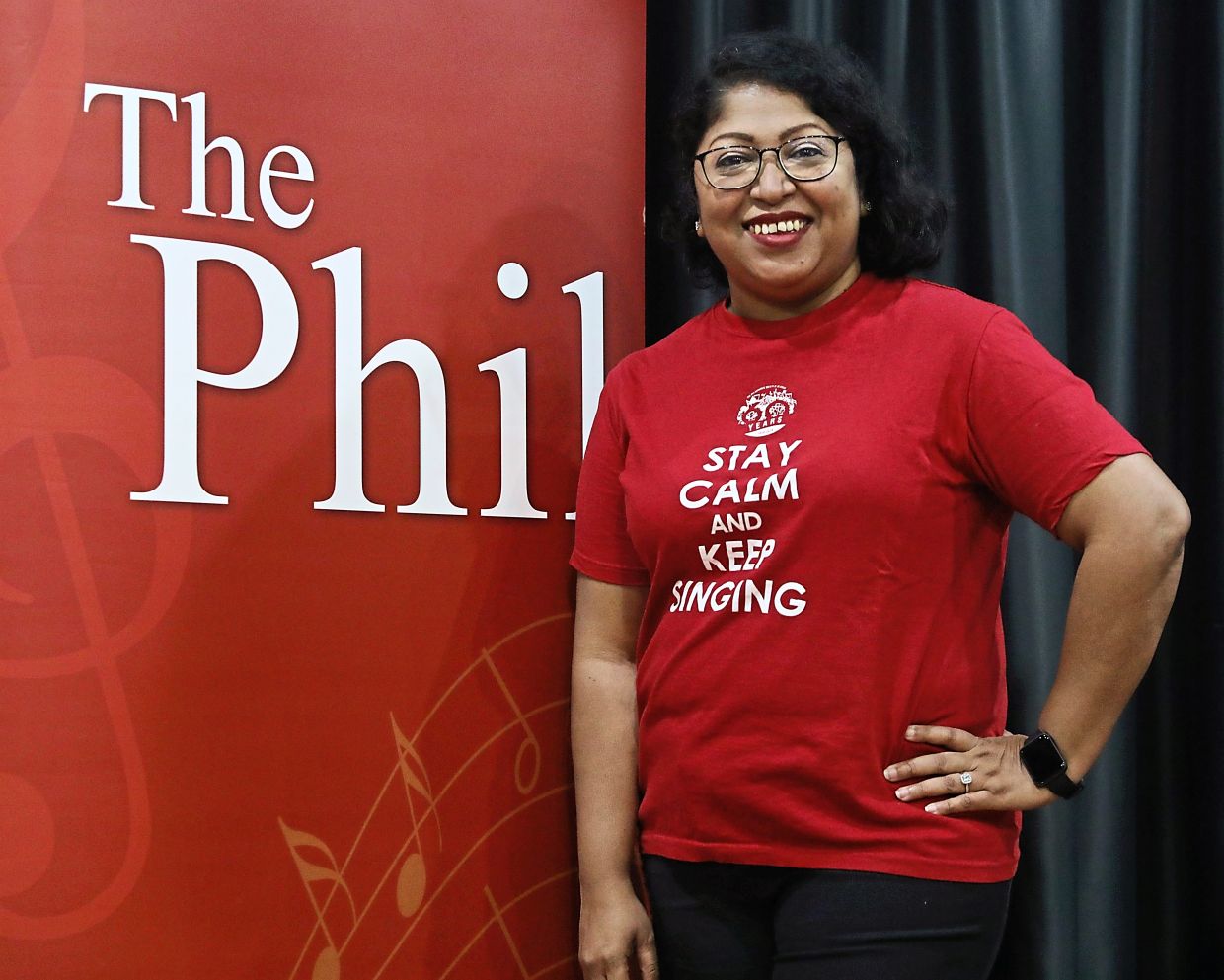 “Everyone is thrilled to put on a memorable show…the kind of show The Phil is known for,” says James. Photo: Samuel Ong/The Star

Peters explained that he hadn’t conducted a choir since 1990 (with The Phil) until 2018 (also with The Phil), although between those years he had worked on choirs and principals in a genre different – the musicals.

“Some of the current members don’t read music (it stopped being a firm requirement a few years ago) and that was a major difference for me, but then the actors I’ve worked with in musicals with other companies also didn’t need to play the music to stream.

“All they needed was a good learning ear and the ability to retain and remember.”

Interestingly, he also points out that over the years he has come to realize that when it comes to the female voice, there is less of it in the “accepted soprano range”.

“I find most are in the mezzo-soprano range, and I also hear most male voices are in the baritone range, very rarely in the tenor or bass range. It’s an interesting development and it doesn’t make no doubt they are there – those high sopranos, tenors and rumbling basses – but our paths don’t cross very often!

There’s a song in the air

As for the next songs of the season concert, what can the public expect?

Peters says: “Christmas is always special to me for obvious reasons – I celebrate it religiously and otherwise. I believe it’s the melodious nature of the music that keeps it eternal. For me, it’s not Christmas without Silent Night, and can you believe that this carol was written in 1818 and is 204 years old? I can play it in the middle of the year and it still smells ‘Christmas’!” As far as audiences go, Peters feels he can’t wait to listen to the beloved Christmas carols year after year.

“And I’m thinking of standard Christmas carols, seasonal favorites. But because of their inherent popularity, we have to offer the public a new approach via new arrangements or secular songs that are rarely heard on the radio or in church. This is always a challenge as it means scouring the internet and finding suitable arrangements that the choir can manage.

But he’s got some scouring, and the nearly 45-member choir is set to perform 11 songs for Songs for the 2022 season. To add to the joy, special guest vocalist Elvira Arul will also perform a few numbers, and the choir will be backed by a three-piece band consisting of Elaine Toon, Kevin Theseira and Corgan Sow.

As a community choir, one of The Phil’s goals is also to contribute to charities within the community. Over the past six decades, proceeds from the productions have been donated to numerous charities across the country.

This year, The Phil launched its “Gift of Song” program allowing the choir to invite children and adolescents from various homes, carers, healthcare workers and community volunteers who work behind the scenes serving the people in need.

“We are also grateful to our community at large who provided a ‘gift of song’ by purchasing tickets to the show and donating them to us, which enabled The Phil to make this concert accessible to segments of our community who otherwise they may not have had the opportunity to attend.

“Members of the public who would like to give a ‘song giveaway’ can continue to do so by contacting us on our social media pages or emailing us at [email protected],” James said.