In the world of performance art, fringe festivals around the world have become a host for artists to achieve complete freedom of expression and a place to share their unique ideas, stories and talents with their surrounding community. “It’s an essential part of the arts ecosystem,” says Ann Sabbah, Founder and Executive Director of the Denver Fringe Festival. “Every city has independent and up-and-coming artists trying new things, pushing new boundaries…and the fringe festival gives them a platform. Without nurturing this part of the ecosystem, what becomes of the arts? »

The Denver Fringe Festival, a four-day celebration of the performing arts, will take place Thursday, June 23 through Sunday, June 26. Scattered across ten venues across Five Points and the RiNo Art District, this diverse and immersive festival will feature over forty unique shows from local creators ranging from comedy to cabaret, circus to magic and musicals to solo acts, as well as original theatrical productions.

It will be Denver’s third fringe, which has quickly become a rewarding addition to the city’s budding arts scene, despite having its first two editions delayed by the pandemic. This year’s festival will be the first where all performances will take place in person. In 2020, its inaugural year, with twenty acts on the programme, the festival had to make a rapid pivot with the onset of COVID and presented all of its performances in a virtual format, either pre-recorded or broadcast live. And in 2021, the festival offered a hybrid format, with about half of its original 37 shows performed virtually and the other half setting the stage for the live festival stage Denver will experience this year.

According to Sabbah, the purpose of the Denver Fringe Festival is twofold. First, it aims to promote independent artists by allowing them not only to mount a production, but also to have feedback and create a community around their art at a lower cost. It is open access, which means anyone can apply and all submissions are generally accepted. If there is not enough room for all applicants, a lottery system, rather than a jury, is used to decide who can perform.

Second, the festival also aspires to make the performing arts more accessible to audiences, especially those who might not otherwise attend theatrical performances. “There’s a place for big-budget, big-budget productions,” says Sabbah, “but performing arts should be for everyone.” Ticket prices are intentionally kept low, and in the case of the Denver Fringe Festival, 70% of the proceeds go directly to the performers themselves.

As a third-generation Denverite, Sabbah grew up immersed in the arts. Theater and performance are a common thread throughout her family line, she says; his brother was an artist as well as a playwright. “Early on, I discovered and internalized the magic of the arts and what they do for us,” says Sabbah, who is a painter with a background in journalism, photo editing, project management, website development and new media technologies.

After attending the Edinburgh Fringe 2017, the world’s largest arts festival, the idea of ​​launching a fringe festival in his hometown became impossible to ignore. “I just knew then. It became a plan and a vision. … It was something I knew nothing about until I found myself there,” Sabbah recalls. “And I really wanted to do something for Denver. It’s one of my goals to contribute something to the fiber of the city in my lifetime.

Sabbah promises that this year’s festival will exceed expectations. With over forty unique performances planned – many of which take place each day of the festival – there will be a huge diversity of content for festival-goers to explore and discover. “[The festival has] everything from original plays and musicals to comedy and improvisation, dance and aerialist, magic and illusionism. And this year we also have a lot of solo performances; some are comedic, some are really personal, deep and moving,” she says.

“I think artists process what’s happening with them internally and what’s happening with us externally – that’s exactly what artists do,” Sabbah continues. “And so, it runs the gamut from issues of diversity, equity and inclusion to gender identity and queer experience. I feel like because it’s open access, there’s such a diversity of experiences and voices, it’s part and parcel of what a fringe festival is – it just lends itself to it.

One of the shows she’s most looking forward to, Sabbah says, is Unpacking, an immersive, multimedia and interactive performance. “The audience helps guide the performer through time, space and genre,” she explains. “There are twenty different possible characters and leads, but the audience will determine all of that as you go along, so you create the narrative.” 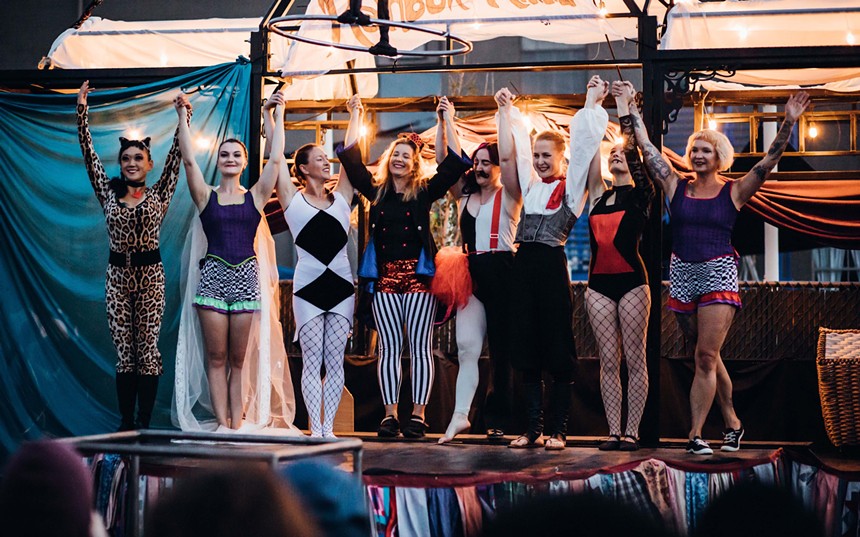 Another highly anticipated show is Josephine, a “burlesque cabaret dream play” for one woman. A musical tribute to the life of Josephine Baker, it toured and performed at various fringe festivals across the country and even had time on Broadway. “It’s really gaining momentum,” says Sabbah. “It’s going to be so beautiful, so powerful and so amazing.”

Between a vintage circus performance by a local troupe, an aerial dance concert by Radiohead, a comedy special featuring BIPOC comedians, and a self-proclaimed “multiverse gay romcom about the Beatles” called Yesterday Today, there really will be something for everyone. In addition to the wide variety of genres and shows for adults, there will also be a Kids Fringe on Saturday and Sunday, with free workshops and shows for children aged five to twelve. “I wanted there to be an element that involved families,” Sabbah notes, “because that’s where arts supporters start — they start when they’re kids.”

There will also be a central gathering place called the Fringe Hub at the Backyard on Blake (between 30 and 31 on Blake Street), which will serve as a base for performers and audience members to regroup before and after shows, as well just a place to buy tickets and pick up programs and merchandise. Throughout the festival, there will be additional street performances by Circus Foundry, a live Rubik’s Cube art performance at the Hub, and chances to see the Denver Fringe Festival poster printed in person by this year’s poster artist, Akyros (Harry Foreman).

“The only way to truly understand [fringe] is just to experience it,” says Sabbah. “And as soon as you have that experience of seeing something that you didn’t expect and you like it, or you’re inspired or amused by it, it really makes you want to walk down the street and buy another ticket for another show.

“There is something that happens at that moment, in this exchange between the interpreter and the spectator, which implants something new”, she continues. “Maybe it’s a better understanding of yourself, maybe more empathy, maybe a willingness to do something, or maybe it’s just a feeling of joy. But I hope everyone who comes to see a show has an experience where they walk away with something new and valuable.

Denver Fringe Festival, Thursday, June 23 through Sunday, June 26. Tickets, $15 per show, can be purchased at denverfringe.org, at the door or at Fringe hub. A festival passwhich gives access to all the shows, is available for $75.